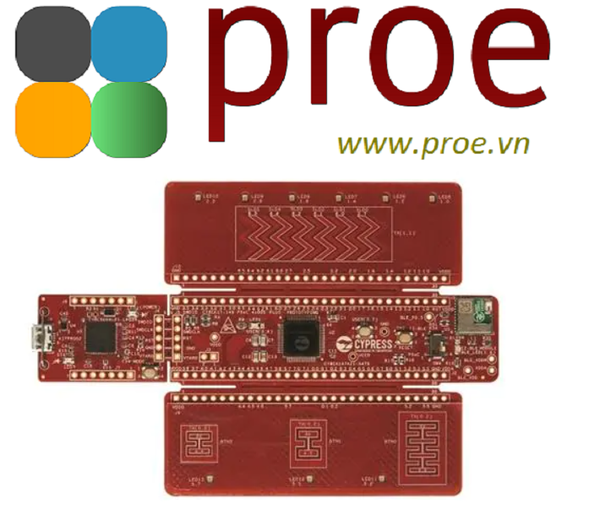 The PSoC® 4100S Plus Prototyping Kit enables you to evaluate the PSoC 4100S Plus device and develop with Cypress's fourth-generation, low-power CapSense® solution using. The kit is designed with a snap-away form-factor, allowing users to separate the KitProg (on-board Programmer and Debugger) from the target board and use it independently.

Featuring the PSoC 4100S Plus Device

The PSoC 4100S Plus Prototyping kit features the Cypress' fourth-generation capacitive-sensing solution that "just works" in noisy environment and in the presence of liquids.

This kit enables you to quickly evaluate and develop with CapSense using the two capacitive boards, one featuring three capacitive buttons and the second featuring a six-segment capacitive slider, both capable of Self- and Mutual-Capacitive Sensing for buttons.

The PSoC 4100S Plus Prototyping Kit provides easy access to all the device I/Os in a breadboard-compatible format and includes an EZ-BLE™ Bluetooth module, an LED and a push button.

PSoC Creator is an Integrated Design Environment (IDE) that enables concurrent hardware and firmware editing, compiling and debugging of PSoC systems. Applications are created using schematic capture and over 150 pre-verified, production-ready peripheral Components. A beta version of the latest PSoC Creator supporting this kit, can be found on the PSoC Community.